There used to be a church on the southwest corner, a one-room schoolhouse on the northwest corner, and a store or tavern on the northeast corner.  The church is still there, although not the Salem Evangelical Church of East Stone Arabia that burned down on January 9, 1938. 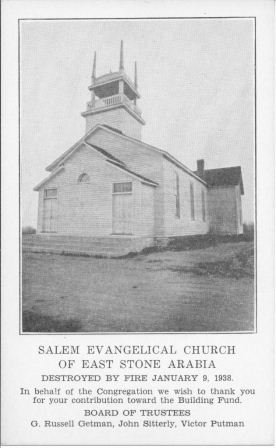 The farm was part of the Stone Arabia Patent granted October 19, 1723.

Mention of the farm is made in FW Beers' History of Montgomery and Fulton Counties, NY as being owned by Michael Bauder before it was owned by Caspar Getman.

"Malachi and Michael Bauder, whose father was one of the early Palatines, and settled in Root, about a mile south of Yatesville, located in Palatine as early as 1745 ; the former, where Conrad P. Snell now resides, about a mile and a half northwest .of Stone Arabia, and the latter a mile north, on the farm now owned by the heirs of Josiah Walrath. Malachi had six sons, named, respectively, John, Michael, Malachi, jr., Leonard. George and Ulrich, all of whom were born here previous to the Revolution, in which he and his two eldest sons participated."

"Michael Bauder, the second son of Malachi, located previous to the Revolution on the farm now owned by Casper Getman. His son, George M. Bauder, familiarly known among his acquaintances as " Honyerry," was born here Aug. 28th, 1785. On arriving at his majority, in 1806, he purchased and settled on a farm adjoining his birth-place, about two miles east of Stone Arabia, formerly owned and improved by Gerret Lasher, some time prior to the Revolution."